Visiting the Sete Cidades Volcano and its coastline takes you to the Protected Landscape Area of Sete Cidades.

Visiting the Sete Cidades Volcano and its coastline takes you to the Protected Landscape Area of
Sete Cidades, the overviews of Vista do Rei and Lagoa do Canário, a hiking trail to several small lakes including Lagoas Empadadas, the village of Sete Cidades, the shores of the lake and Lagoa de Santiago. It also brings you to the fisherman and beach village of Mosteiros and the amazing hot salted waters of Ferraria, so bathing suit and towels are needed. 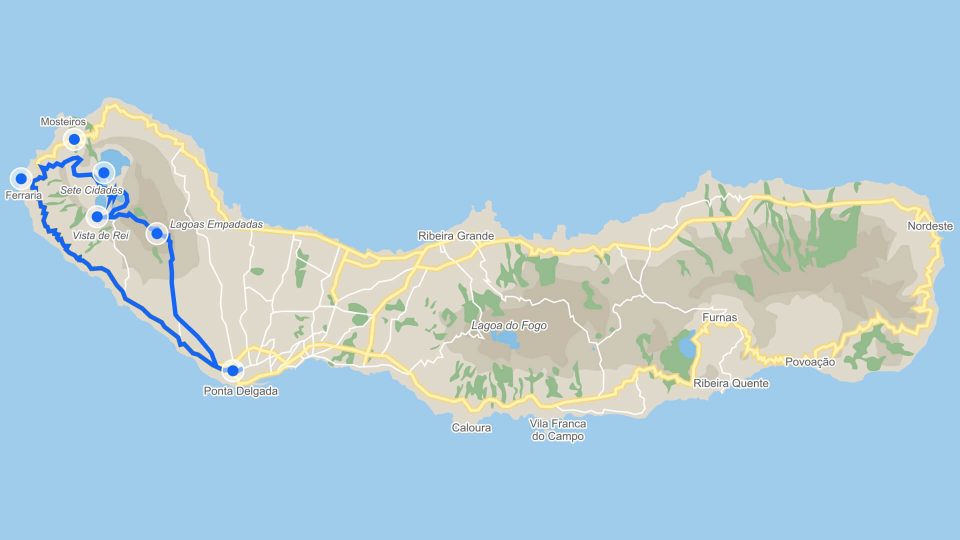 The Lagoa das Sete Cidades is one of the most famous places in the Azores Archipelago.

Lagoa das Sete Cidades, “Lagoon of the Seven Cities” is a twin lake situated in the crater of a dormant volcano on the Portuguese archipelago of the Azores. It consists of two small, ecologically different lakes connected by a narrow strait, which is crossed by a bridge. The volcano is located on the western third of the island of São Miguel. The Lagoa das Sete Cidades part of a natural landscape of communitarian interest: it is the largest body of water in the region and one of the most important freshwater resources in the archipelago.

Mosteiros is the westernmost settlement on the island of São Miguel.

Mosteiros is located in the northwestern part of the island of São Migue. The main village is located on a fajã at the tip of the island, surrounded by coastal cliffs that reach 20 metres (66 ft). The parish is primarily recognizable by a group of islets that lie offshore: two small islets to the northwest, and a group in the southwest, including one further west and two smaller islets, slightly east of the large islet.

Ponta da Ferraria is a lava fajã (or lava delta) located in the parish of the Ginetes, Ponta Delgada municipality.

This lagoon occupies a maar explosion crater, the result of a water table, located in one of the most active geological faults of the island of São Miguel. The peculiarity of this explosive crater formed some 3,900 years ago is that it originated in phreaomagnetic explosions in which the rising magma has reached contact with existing groundwater levels in the underlying formations. Due to its genesis the Lagoa do Congro presents characteristics that distinguish it from most of the lagoons of the island of S. Miguel. Its main feature is that it is embedded in the surrounding region, relatively flat, in the form of a large open hole in the surrounding area, as opposed to occupying the top of a well-defined volcanic cone.