Lagoa do Fogo - Half day tour

Around the Lagoa do Fogo area you visit the crater and hike to its lake which is part of the Nature Reserve of Lagoa do Fogo.

In the Lagoa do Fogo area you visit the top of the crater with its lake which is part of the Nature
Reserve of Lagoa do Fogo, the Natural Monument of Caldeira Velha with its hot springs and the Salto do Cabrito waterfall. 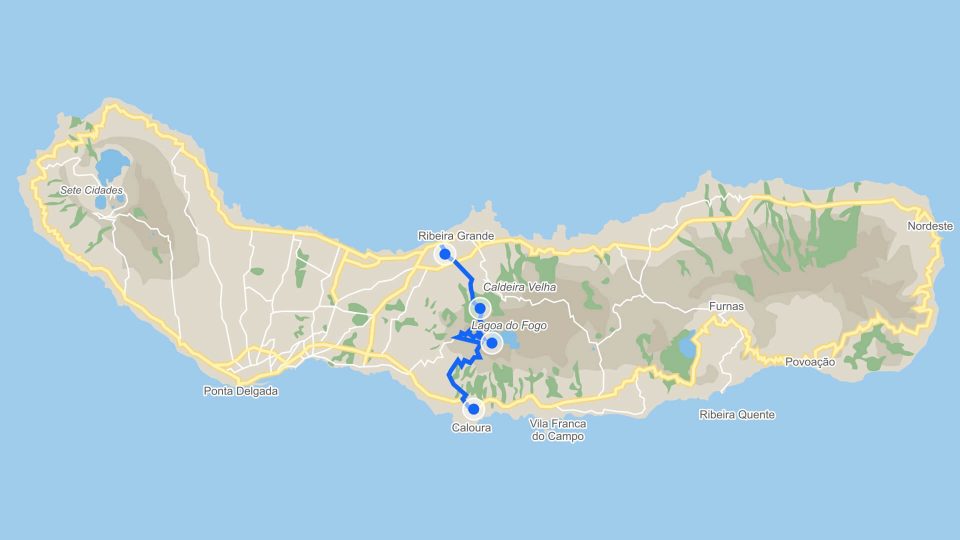 One of the biggest lagoons on the Azores, and the second biggest on São Miguel island.

Lagoa do Fogo is one of the largest of the waterbodies in the Azores, and occupies the central caldera of the Água de Pau Massif, in the central area of the island of São Miguel. The caldera is the youngest volcano on the island of São Miguel, formed approximately 15 000 years ago, resulting from the collapse at the top of the volcano, some 5000 years ago. The last eruption occurred in 1563. It falls within the borders of the civil parishes of Conceição, Matriz and Água de Alto, in the municipalities of Ribeira Grande and Vila Franca do Campo, respectively.

The Caldeira Velha, in Ribeira Grande, on the Island of S. Miguel, is a Natural and Regional Monument, being part of the Biosphere Reserve.

Besides its natural wealth – and very exotic – and diversity of vegetation and fauna, the Caldeira Velha is also much visited by those who want to bathe in the warm and thermal waters, with medicinal characteristics.
The water comes from hot springs of thermal origin, forming cascades, and channels with brown tone due to the abundance of iron.
One of the most sought after places is the pool where you can be as if you were in a jacuzzi.
The Caldeira Velha is located in the crater in the Volcano of Fogo and has fumaroles, zones of degassing, and a spring of thermal water. There are two pools of hot water: one can reach 25 degrees celsius and another, with water from the fumaroles, which varies between 35 and 38 degrees celsius.

It is an imposing waterfall with about 40 meters of altitude that excels by the freshness and the peace that provides to those who visit it.

Salto do Cabrito Waterfall features crystalline waters that invite bathing.
It is located near the town of Ribeira Grande, accessible by the Lagoa do Fogo road through a dirt track.
It also integrates a pedestrian route in a circular route with beginning and end in the zone of the Boilers of Ribeira Grande. The trail begins next to the geothermal power station of Pico Vermelho.